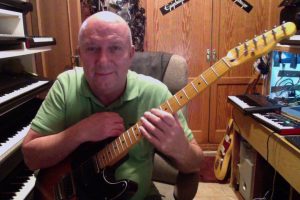 We’ve taken a step (forwards?) by moving into download sales. Thanks to Peter Anthony Robinson, we’ve listed his new album as a downloadable product – either the whole album or individual tracks.

We’ve also provided a format option for the complete album which gives a choice of MP3. M4A or WAV. Individual tracks at this stage are M4A format only.

“Death Watches Over Us” is a ten track album by ex Grimbarian (now living in Spain) Pedro.

The tracks are all new, except “Blood in the Snow” and an early review by our American friend, Fake Zappa, brought the word “awsome” into the conversation a few times.

The advantage of hosting downloadable albums is that we provide the listener the opportunity to Listen First/Buy Later that generally, we can’t offer for physical CD’s.

Check it out HERE