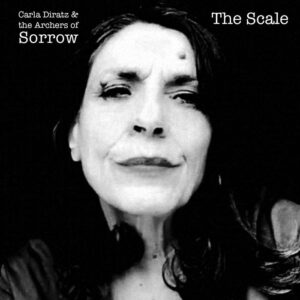 When, in early 2020, Carla Diratz told me of a new project with English musicians, I was intrigued.

Covid caused delays to the recording and release, but “The Scale” is now out there, in all it’s glory. Once again, Carla contributes lyrics and vocals, alongside Martin Archer, Nick Robinson, with Dave Sturt (bass guitar), Adam Fairclough (drums), Charlotte Keeffe (trumpet), Jan Todd and Julie Archer (choral vocals), collectively know as “The Archers of Sorrow.

Recorded by the musicians at various studio’s, it’s all put together by Martin Archer at Discus Music Studio in Sheffield. Produced by Martin and Nick Robinson, it really is an amazing collaboration.

Robert Wyatt once described Carla as “the SOULFUL Ms Diratz”, on hearing her version of “Sea Song”.

From the opening notes of the title track, it is obvious that this is going to be an extremely pleasant listening experience. Borrowing from Jazz, Rock, Blues and even world music genre’s, the album winds it’s way through variation, but with Carla’s voice as the one constant ingredient.

The music itself is diverse. Some tracks are delivered in English, others in French. Carla’s influences make intermittent appearances. The haunting song, “Mother” and “Teen Dance” (which seems to be a throwback to the Chain period), are illustrations of this album’s musical diversity. However, that is not to take attention away from the whole album, which is, another exquisite offering from Ms Diratz.

During recent times, music has thrown together some strange bedfellows, often recorded in bathrooms and even outdoors. That is not what serious music is about, but ‘The Scale” is indeed a serious project.

It is indeed soulful, grown up music for grown up times

“What a breath of fresh air from Carla Diratz and the Archers of Sorrow, with their new album, ‘The Scale’.

In modern music there appear to be only two voices, a male version and a female version of a vocoder, drenched, completely synthetic, straight out of someone’s computer, along with a gaggle of unrecognizable, sampled instruments.

You certainly cannot mistake Carla’s voice, a deep, sensuous, sonorous boom, (possibly the result of endless cigarettes and wine), complemented by the Archers of Sorrow, a fine bunch of musicians, never reaching for the obvious.

Listening to them is like relaxing in a warm bath, lovely.”