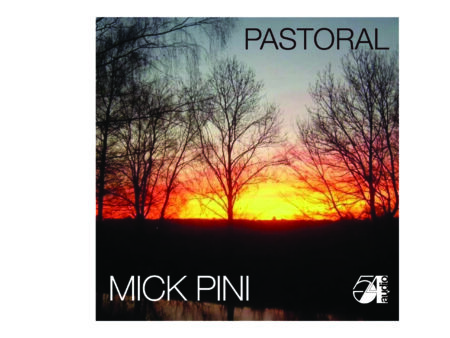 It will be available on www.mickpini.com / and all leading digital platforms.

The 4 track EP is the first of 2 leading to a new album. It also marks the duo’s second collaboration following last year’s acclaimed ‘Backtrack’ anniversary album.

“Pastoral” is an overarching conceptual title track that taps into the reflective mode of Mick’s playing and makes an essential connection between his music and art. He’s an equally good painter and photographer as evidenced by the EP’s artwork.

According to Wikipedia, a pastoral lifestyle: “lends its name to a genre of literature, art, and music (pastorale) that depicts such life in an idealized manner, typically for urban audiences.”

In musical terms it can also be: “A composition for instruments characterized by simplicity and sweetness.”

Pini moulds the latter concept to his own ends by finding a bluesy idyllic sensibility via his delicate touch and beautiful tone. This brings real feel and emotion to the title track. It’s a mixture of rustic reflection and spiritual enquiry, beautifully realized with the ghost of Peter Green.

It’s also the touchstone to 4 tracks that take us on a musical journey from introspection to pure exhilaration.

The tracks were recorded Mick’s ‘House of Happiness’ studios in Germany and Craig Marshall’s Audio 54 set-up in the UK and the result finds septuagenarian Pini exploring a creative high.

“I’ve always enjoyed a challenge” explains Mick. “When I first recorded with Mike Vernon it was my first time in a proper studio and with musical guests, but it brought out the best in me. It’s the same with Craig whose contemporary approach and innovative ideas have pushed the music into new and exciting directions.”

Craig adds: “We also had to record remotely which was totally new for Mick, but by the end of the project we had a real connection. You can hear it in his playing.”

Pini dips into his own back catalogue for “Careless”, a beautiful melodic, soulful groove with a catchy uplifting radio friendly hook, topped by a warm vocal and Craig’s feather light production
The Audio 54 style ‘Spark’ is a Marshall penned percussive groove which finds Mick illuminating a track with a subliminal Traffic feel with judicious echo and wah-wah.

The EP closes with ‘Just Playin’ which finds Pini in a retro mode, as he interweaves his sinewy tone with an earthy sax on a back porch after hours feel. It sounds like Freddie King meets King Curtis with an Albert Collins chicken squawk, refracted through Pini’s own delicate touch

So there you have it, the perfect taster for a creative collaboration that has realised 20 tracks in all. Press play and enjoy the beginning of the ride.