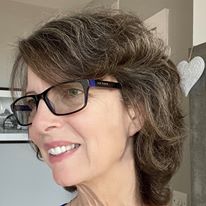 Trudey Martin lives, works and writes in Lincoln, England. She has worked in social care for many years and likes to incorporate this experience into her writing.

Trudey has previously written and directed plays and several academic articles but hadn’t until recently published a novel.

Her first, No Deadly Medicine, introduces Verity Spencer as the protagonist. It is set in Lincoln and London and delves into the world of child trafficking.  **BUY**

In the second book Verity uncovers a web of manipulation and abuse as she looks into the disappearance of Gloria, a 15 year old girl. She not only finds herself in danger, but the lives of the young people close to Gloria are also put at risk.  **BUY**

Trudey has always enjoyed reading suspense, crime and mystery thrillers and wanted to create a resourceful heroine, who she says contains elements of herself, but is “much more confident and resilient than I would ever be!”

In her spare time Trudey likes to learn Spanish and travel to Spain. Perhaps, in a future book, Verity might head off to Spain.