Alice Brown is a Singer/Songwriter from Inverness in Scotland.

Although predominently a Rock musician, Alice is not tied down to one specific genre of music, having recently written and recorded a Trance track.

Her latest album, ‘At Ease’ is released with her music collaborators (Martin Stephenson and Susanna Wolfe), and it appears under the banner of Alice and The Rainbow String Band.

The opening track, ‘Sitting on my Porch’ immediately cements Alice Brown as a storyteller – this song reminisces on her experience of being out of work. The bass driven riff adds to the dismal realisation of that situation – with the shadowy keyboard only partly lifting the gloom.

Vocal harmonies bring a sense of enjoyment to proceeding on the second track, aptly named ‘Life is Crazy’. We are then treated to some more clever guitar work on ‘Sitting quietly in the Afternoon’ before being switched to the ‘Catfish Blues’ with it’s slidy sound.

Another fluid genre switch comes with the Folksy inspired, ‘Star in the Sky’, which is followed by a return to the identifiable, harmonious rock sound of ‘Only the Story’. 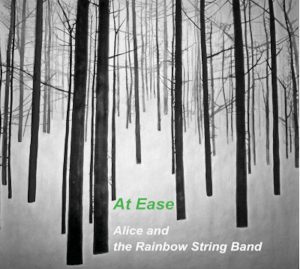 The line up of the Rainbow String Band:

(Membership is not fixed as it consists on musicians collaborating with Alice on an album).