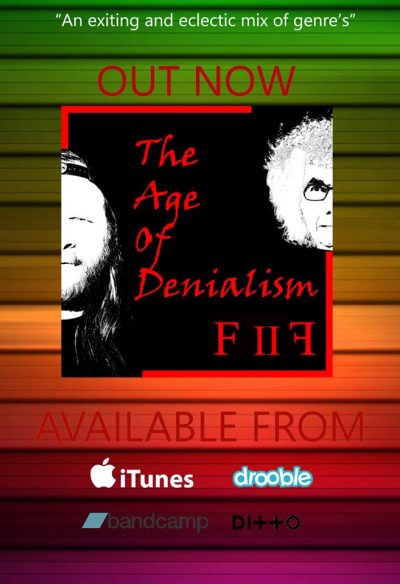 ‘The Age of Denialism’ is the 2nd release of 2019 for this eclectic band, who’s genre fluidity gives them a unique blend of both expectation and surprise.

Face To Face is Mel O’Clair and David de Silva and they have been working together for eighteen months.

I asked Guitarist Mel and Vocalist David to provide the some insight to the inspiration, writing and recording of their tracks:

LAAMB: What’s your process for writing a track and indeed, an album?

MEL: Album writing process continued in the usual manner – I wake up with a tune in my head and record something – then add stuff.

I then send it to David who puts on words and vocal tracks.

DAVID: After Mel, I then have the task of essentially unscrambling a spaghetti of a song with many hours editing, to produce something that we both are happy with.

The whole process can take as little as a day or up to even months to complete.

“This album is a spotlight into a modern age of discourse. It explores many facets of our society including how we’re sleepwalking into ideological puritanism, our loss of innocence, the denial of realities, a self destructive narrative and the acceptance of finality.”

Here’s some inside info on the writing/recording of Age Of Denialism – Track by Track:

1. Burning Out Of Time

MEL: I had just made a banjo out of a wine box and recorded a test piece to hear what it sounded like. I looped it and added some other instruments then sent it off to David.

DAVID: The concept of Burning Out Of Time comes from the idea that social media’s immediacy in today’s modern culture overexposes our fragilities.

MEL: I’d been listening to the sound track from Twin Peaks and wrote a dreamy jazz instrumental called Red Suit Red Hat Red Tie. I sent it to David who turned it into Barry White MEETS Prince!

DAVID: Though lyrically simple, Beautiful Dancer actually deals with innocence and obsession. The whole song is a kind of homage to songs such as The Rolling Stones hit song Miss You.

MEL: This was a recording of just three tracks: The MAIN guitar rhythm track, a footsteps type beat track and a track of weird random noises……. BUT ….. when I sent it to David he DIDN’T NOTICE THE MAIN TRACK!!! just down loading the beat and the weird stuff!

DAVID: High Heels is an understated snapshot that highlights the unrealistic oversexualization and the materialistic values pushed in our modern life.

MEL: It’s just THREE chords and an organ. With some other noises thrown in …. It just gets louder as it goes on.

DAVID: Broken Down is an inversion of the old nursery rhyme The Wheels On The Bus. Its perspective is now focused on the duality of good parenthood in modern society.

DAVID: Brighter Day peers in to the frivolity of some people escaping toxic relationships, with many who will go back to what they know over truly being free.

MEL: This is the backing track from a comedy song I’d written about the perils of internet dating for the elderly! The original song was almost eight minutes long!

DAVID: Give Me Space represents the idea of an all encroaching surveillance state that we now live under and how even our online presence is being used against us.

MEL: I wrote a song for The Grimsby Songwriters’ Group called: “IS HISTORY A THING OF THE PAST?” I sent David the backing track from that song – he moved the ending to the beginning and chopped out some of the gaps between verses.

DAVID: Counter Culture is a self reflecting commentary, looking at society’s inaptitude in dealing with the astronomical rise of inner city gang violence.

MEL: This was a test piece for a lap steel guitar I’d made (Dobro tuned GBDGBD)

DAVID: This song shines a light on the politicisation of all us and the dangers of the modern curtailing free speech which has become commonplace.

MEL: I hadn’t sent David anything for a while so I did a one guitar improvisation …. Which I instantly forgot how to play as soon as I sent it to him !

DAVID: This song looks into how many veterans have had to deal with their lives being used in a game of profit driven ideology over the reasons they fought for.

MEL: I was trying to do a U2/The Edge type thing but wasn’t happy my echo/delay effect plug in … so I just added more and more guitars played slightly one after the other.

DAVID: This song delves into how our modern society is trying to kill the idea of classic role models, with the use of identity politics and shame culture.

MEL:  This started life as a Gary Moore tribute instrumental called ‘Heard It All Before’.

DAVID: With loss and finality a universal concept, Dark Room is a deeply personal song that tries to push a narrative of eventual acceptance for the things we can’t control.

MEL: I’d written a song and a string quartet instrumental about a Ghostly legend from the North East of England. His song is pieced together from the various components of the solo violin song accompaniment and the orchestral bit.

I grew up in Sunderland and the ‘Cauld Lad Of Hylton’ was a story often told locally about the murder of a stable boy in Hylton Castle (the keep still remains) by the Earl. The Earl threw the dead body in a well to hide his crime but when discovered he ended up being pardoned by the king !!!!

There followed night visitations by the ghost of the murdered boy who wrecked the kitchen pulling hot coals from the fire and lying on them as he was so cold.

Locals still tell tales of a young boy who wanders into local hostelries and says “I’m cauld (cold)” and sits by the fire…. But no matter how much people try to warm him he remains deathly cold then … disappears.

DAVID: Calling Of The Sea is an ode to the passing of the torch and how we all eventually get metaphorically swept away in our lives through time.

The album, ‘Age of Denialism’ by Face to Face is available via Bandcamp.

More Info on Face To Face:

The LAAMB Profile Page for the band is HERE.