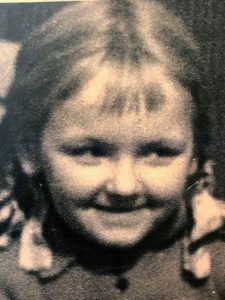 Alfreda Benge (Alfie), is an Artist, Illustrator, Film maker and Lyricist who lives with her husband, Robert Wyatt in Louth, Lincolnshire.  She was born and spent the first few years of her life in war torn Poland and Austria, before moving to the UK at the age of 7. From about age 9, Alfie wanted to be either an artist or a poet (although her mum, Irena wanted her to become Prime Minister).

The young Alfie had always been good at painting, and at an early age, one of her friends’ father gave her a proper Easel and paints as a Christmas present. She recalls setting up outside the Albert Hall and Hyde Park and declaring herself to be an Artist. Alfie says she loved poems too, and for a while, flitted between painting and writing.

At home, the family income was subsidised by taking in lodgers. These tended to be people who weren’t really able to go anywhere else. Extremely influenced by this, Alfie grew up in an environment that practiced Equality and in particular, a lack of kowtowing to Authority.

At 17, Alfie, though in 6th form at Grammar School, desperately wanted to go to Art School and wrote to every one in London, enquiring about future availability. In early 1958, Camberwell Art College wrote offering an interview. Unfortunately, (on the day) Alfie’s school refused to allow her time off to attend. Defiant and determined, she went anyway, the result being that she was thrown out of school. Camberwell only had a place for a September start, so, without a school, Alfie took a job. She duly went to Camberwell, staying for 3 years. She then gained a place at the London School of Printing, studying Typography and Graphics for a further 2 years.

Alfie then put together all of her previous work incorporating Paintings and Photos, and applied to the Royal College of Arts. She selected Film as her first choice and Stained Glass as her second. The selection process was long, but Alfie found herself in the last 20 candidates for the final 7 places. Perseverance paid of and she won her place on the Film programme. At Royal College of Art, Alfie combined Visual and Writing as specialisms for the undergraduate part of her study. At the end of the 3 years, The Royal Academy of Arts were looking for a Film maker and Alfie secured the role as part of her Post Graduate studies. The film was a celebration of the Royal Academies centenary. At the end of that project, Alfie finally finished her days at Art School at the age of 28.

Taking on a role at IBM, the job was to oversee several Films being made by outside  companies, as a Producer. During her 18 months tenure, Alfie made a film which was to be a celebration of the 1960’s. By now, her friendship with actress Julie Christie was well established, and Alfie determinedly wrote into her film, aspects relating to African independence and the Black Power movement. It was a powerfully political film she says, a sort of warning for the future. When the men in shiny suits came to view the film, they watched in silence. The reason the men in suits didn’t like the film was it had to be used in a conference that included South African IBM people. They were not too keen on the idea of Black Power at the time!  Afterwards Alfie was told that they wanted to “remake” parts of it, but that they wouldn’t be inviting her to do it. So she walked out. The highly independent Ms. Benge was showing that she wasn’t scared by anybody, something that would be proven at a later stage of her life when she successfully wrested her husband’s song portfolio away from Sir Richard Branson’s Virgin Records.

Next, Alfie worked in Canada on McCabe and Mrs Miller, a Robert Altman film with Juie Christie and Warren Beatty, helping on dialogue for Julie. ( She played a cockney madam).

In the meantime, Alfie had met Robert Wyatt, former Drummer with Canterbury bands The Wilde Flowers and Soft Machine. Wyatt was in the process of making his own project’s 2nd album with the band Matching Mole, and Alfie contributed some (uncredited) backing vocals to “Little Red Record”. As soon as the album was finished, Robert broke up Matching Mole. He planned to bring a band back together once he had material for a new album.

Then, Alfie was invited to work in Venice as an editing assistant on the film “Don’t Look Now” starring Julie Christie and Donald Sutherland.  Robert accompanied her, and while she was working, surrounded by the Venice lagoon, he wrote most of the music that became ‘Rock Bottom’, one of his most loved albums.

Back in London though, what happened next changed both Alfie’s and Robert’s lives forever.

Attending a birthday party with Alfie at the home of June Campbell-Cramer on June 1st, 1973, an extremely inebriated Wyatt managed to survive a fall from a fourth floor window of June’s Maida Vale flat. He was however very seriously injured, breaking his back. Following a period in a coma, he finally awoke a paraplegic.

Paralysed from the waist down, his drumming days were over.

Reinventing himself as a solo musician, Robert, using the unfinished compositions from before his accident, recorded the album Rock Bottom.

In the meantime, Alfie had become Carer, Driver, Manager, Gopher, Vocalist, Album cover designer and Lyricist. It was this latter role that was to define their lives, both personal and professional until Robert finally retired from being a working musician in 2016. In 1988 they upped sticks from London and moved to Louth in Lincolnshire, the market town where they still live.

The years between 1973 and 2016 hold many trials, tribulations and successes for Alfie. Many are freely discussed in Robert’s biography, ‘Different Every Time’, but to get some perspective, Alfie prefers that people listen to her interviews, and some of these are listed below. The “Diggers” interviews include insights to Alfie’s choices of music, whilst the two LAAMB interviews include details of her roles in Robert’s songs.

Unsurprisingly, given her extensive musical collaborations with her husband for over 45 years, Alfie believes that her legacy is as a Musician/Lyricist, and in retirement, that is how she likes to be remembered. However, her life as an Artist is still well documented, and signed, limited edition prints of her Album covers are available for collectors. (See Links below).

Robert and Alfie in Louth – LAAMB Interview with Robert Wyatt and Alfreda Benge.

Robert Wyatt Profile Page on LAAMB (Up to 1988)

Ruth is Stranger than Richard