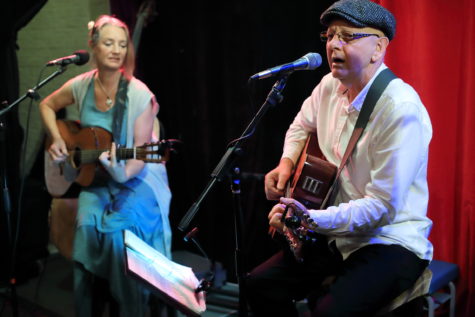 Bell & Booth are a genre fluid duo, based in Lincolnshire, UK.

Bell and Booth sing and play harmoniously in a variety of styles embracing Latin jazz, blues, folk and combinations thereof.

The tunes and lyrics, composed by Ruth, inter-weave delicate, and at times complex chord sequences that complement the underlying messages in the lyrics.

Bernie’s accomplished and assured baselines are background landscapes that give authenticity to the depth of emotion conveyed through the lyrics. 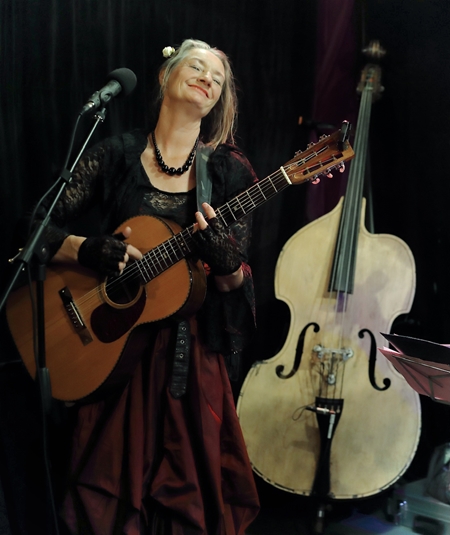 Like many musicians, Ruth gets a buzz from an appreciative audience when she performs. Picking out melodies on the piano whilst still very young, her second love came later in the form of a guitar.

By her thirties a blossoming talent for song-writing was interwoven with her growing musicianship. Combined with a passion for dance and honed through training as a movement teacher – these skills were recognised and used when Ruth joined her first dance band – ‘Andiamo’ – in the Lake District. This was followed by ‘Eggs’ which featured original material, instrumental guitar pieces and songs.

Returning to her roots in Lincolnshire, Ruth focussed on crafting her songs and weaving the lyrics through her music. Now harvesting years of musical experience, Ruth is equally comfortable backing re-imagined covers for the Lincolnshire steampunk band: ‘Capt Caleb’s Rocket Dogs’, as she is leading originals from her earlier Lincolnshire-based bands: ‘What Ruth said!’ and ‘Flaming Iris’. 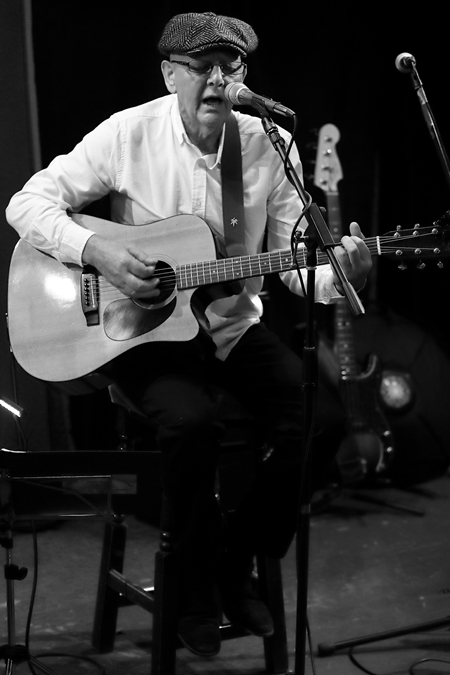 In 1973 Bernie moved to Australia, and soon established himself playing in various bands, joining the already successful Brett Garsed and his cousin Andrew, to form rock band Black Dog and performing around the State of Victoria. After Brett left on a world tour, Bernie formed country band, Red Texas Rose. In addition in 1994 he became production manager and sound engineer for M Ahearn Sound which supplied PA systems and sound engineers to major festivals and touring artists from around the world.

In 1997 Bernie returned to the UK and performed solo for a couple of years while living in Ireland. Later, having moved to York and taken up residence on a boat with his partner Sue, he met fellow guitarist, Alan Moulding with whom he formed a duo called The Guild. A live cd was recorded of their songs which was featured regularly on local BBC radio.

In 2018 Bernie moved to Lincolnshire where he met singer/songwriter Ruth Bell.

Utilising their complimentary skills, Bell & Booth was born, which reflects both of their wide musical interests. They are currently involved in a project recording original work and selected covers with Australian friend of Bernie’s, Pete Howell, double bass player of wide repute (Bert Jansch) and sound and production engineer. Pete has introduced Ruth and Bernie to ever higher musical aspirations and wider horizons.