* Dr Robert Wyatt has retired from making music – both recorded and in public.

He told LAAMB in an exclusive interview recorded during October, 2017:

“There comes a point when you know it’s the end”

So the recording/live performance career of Robert Wyatt, which started when he joined The Daevid Allen Trio in 1963, is over – but WHAT a career it’s been. 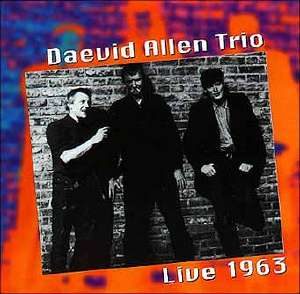 There’s an historic audio document, the earliest of ‘Canterbury’ recordings. Basically, its The Soft Machine, 4 years before they formed . It was recorded at the Marquee Club in 1963 with one microphone and a Phillips monophonic tape recorder, and the band were performing as part of Mike Horowitz’s ‘Live New Depatures’ series.

The Wilde Flowers were the next band on Wyatt’s list, comprising Wyatt, Hopper, Kevin Ayres, Brian Hopper and Richard Sinclair. In 1966, Ayers and Wyatt left, to form The Soft Machine with Mike Ratledge and Daevid Allen. A trip to Europe resulted in Allen, an Australian, being refused a visa to return to the UK, and so the band continued without him.

In 1968, the band were signed to a 1968 USA tour, supporting The Jimi Hendrix Experience. During the tour, an album, “The Soft Machine” was recorded and released. At the end of the gruelling tour, Ayers left and Ratledge returned to England, and so The Soft Machine ceased to exist. Wyatt stayed on in America, writing and recording demo’s, upon which he honed his multi instrumental skills. He was playing about with one song, when famously, Hendrix walked in, sat down and added the bass parts to what would become, “Slow Walking Talk” later included ”on the album on Cuneiform records “68’** which is in retrospect the first Robert Wyatt solo record, much of the material being incorporated into subsequent Soft Machine records.

In December, 1968, Wyatt and Ratledge re-formed as “Soft Machine” and enlisted their former colleague, Hugh Hopper to fill the bass slot. Soft Machine 2 was released in 1969, and other albums (3rd and 4th) were released in 1970 and 1971 respectively. The latter, which was wholly instrumental, robbed Wyatt of his vocalist role, and in August 1971, following turmoil within the band, he was dumped from Soft Machine by his colleagues.

In August 1970, Robert Wyatt had released, totally improvised around his piano and drums with a few guest instrumentalists, an album ‘The end of an ear’. Vocal parts, most noticeably featured on Gil Evans tune ‘la nevada’, but the album was mostly [ but not all ] wordless. 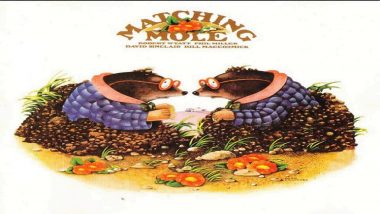 Wyatt’s new project on splitting from Soft Machine was Matching Mole, a play on the French for the name of his previous band, being Machine Molle. The band’s only previous collaborator was organist David Sinclair, from the Canterbury band ‘Caravan’. Several radio broadcasts of these bands, which often give a better idea of their live performances than do the original official releases, have been released on Hux records.

Before Wyatt could record Matching Mole 3, he underwent a life changing event, which altered his musical focus forever.

Attending a birthday party with Alfie at the home of June Campbell-Cramer on June 1st, 1973, an extremely inebriated Wyatt managed to survive a fall from a fourth floor window of June’s Maida Vale flat.

“I did not lose consciousness during my defenestration: It’s the drugged up first few weeks in hospital that i could not remember.”

Doctors told him that he had survived because of his relaxed state, due to the voluminous amounts of alcohol in his system. The result, as all Wyatt fans know, was paraplegia, paralysed from the waist down, unable to use his legs, and therefore, he awoke, an ex Drummer.

Previous to the fall, Robert and Alfie had been in Venice where he had started to write material that would have probably become Matching Mole 3. Lying flat out in hospital, Robert had plenty of time to think about how he could adapt the situation in which he suddenly found himself. Once he had “recovered” sufficiently to leave his bed, Wyatt, now in a wheelchair, found a piano, and began complete the songs started in Venice. Unable to write music, the songs were “recorded” in his head – 40 minutes of music. Still, when he was finally discharged in January, 1974, he had no real means of support, no band, and nowhere to live. (Alfie’s flat was on the 23rd floor and didn’t have a lift).

Still, with the help of friends, they managed to acquire a flat, some capital, a car and more importantly, the means with which to work. *

Gathering together the songs for ‘Rock Bottom’, Wyatt set about recording as much of the album himself. Obviously he couldn’t play drums, but this gave him the opportunity to develop his “voice” to mimic certain instruments (as per the percussion, contrived of his own breathing, on Alifib).

The album was a success, in that it became the basis of the new Robert Wyatt solo project. Despite people trying to prove to the contrary, Rock Bottom was not a comment on his sudden change of life condition, and this is proven by the fact that most of the material had been written/conceived pre events of June, 1973!

‘Rock Bottom’ was released on 26th July, 1974, and on the same day, Robert and Alfie were married.

However, the major musical development that had been established, was his move from drummer to singer. 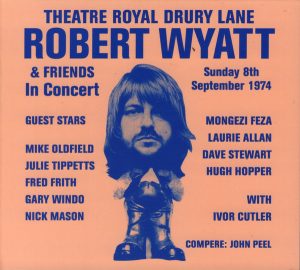 On September 8, 1974, a Live concert, featuring most of Rock Bottom plus a few extra’s, and essentially, performed by the band from the album, took to the stage at The Theatre Royal, Drury Lane – and billed as “Robert Wyatt and Friends”. The concert was recorded and is still available.*

It was during this period, post accident, that Alfie gradually took on the role of looking after Robert’s career. In effect, she became his manager, negotiating, and famously taking on and beating Richard Branson at Virgin Records. As far as I am aware, Robert Wyatt remains the ONLY ex Virgin artist to walk away with his songbook intact. And that was down to Alfie.

As well as caring for Robert following his accident, and as well as doing the tough stuff as his manager, Alfie also started to have input to his work. Co-writing many of the songs that Robert is renowned for, Alfie wrote/suggested/edited/ and also sometimes sang on his records. She also painted his album covers. This proved successful, and having basically given up her own artistic career to look after Robert, Alfie became an integral part of his success.

Following Rock Bottom, Robert recorded an almost “cheeky” version of The Monkees hit, “I’m a Believer” which remarkably, as a pop song, reached the Top 30 in the UK charts at the time.

***Two albums recorded in 1974 were “The Peel Sessions” and “Solar Flares Burn for You”. These included songs from Rock Bottom, and “Ruth is stranger than Richard” which was released in 1975, and in fact the latter was Wyatt’s last official studio album for a decade. It ages well, and remains a “best seller” from the Robert Wyatt solo catalogue. The tenor solo on ‘Team Spirit’ is by George Khan. Brian Eno was an adventurously helpful visitor to the studio during those sessions, as he had been on the Little Red Record.

For the next decade, although recording with many others, Robert did not produce any new work of his own.

Onto 1985, and “Old Rottenhat” brought Wyatt back from his solo recording hiatus with quite literally, a “solo” album on which he played and sang every track – without a band.

Then followed a further major change in Robert and Alfie’s life, because in 1988, they moved to Louth.

Their story from that point, is here: LINK and INTERVIEW

“People who sent money for when I got out of hospital – (we were virtually skint at the time -should be acknowledged): 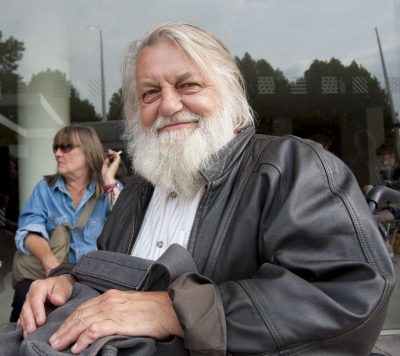 *Robert was awarded an honorary Doctorate of Music by The University of Kent, in July, 2014.

*** Solar Flares, recorded in Nick Mason’s basement studio, and the Peel solo sessions, are available on Cuneiform Records, as is ’68, which is basically a demo for Soft Machine volume 2.