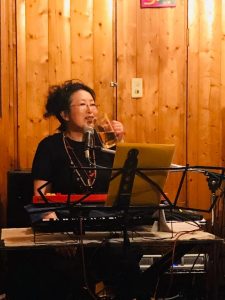 Yumi Hara is a London based, Japanese musician, teacher, composer and researcher.

Yumi studied medicine at the University of Tsukuba in Japan and practised as a psychiatrist for eight years before moving to the UK in 1993. In 1999, she graduated in music from City University in London with a first-class honours degree specialising in acoustic and electroacoustic composition and performance (piano). She also undertook extensive study of non-western musics. She has completed her PhD in composition at City University under Rhian Samuel in 2005. 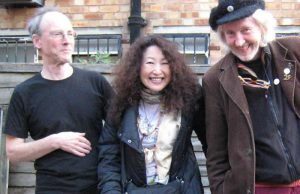 She released a CD album ‘Dune’ with Hugh Hopper (ex-Soft Machine) in 2008, subsequently formed bands and projects including The Artaud Beats (with Chris Cutler, John Greaves, Geoff Leigh, all from Henry Cow), you me & us with Daevid Allen of Gong, Chris Cutler (LEFT), Half the Sky/Lindsay Cooper Songbook (with Chris Cutler, Tim Hodgkinson, Dagmar Krause, Chloe Herington, Mitsuru Nasuno), Jump for Joy! (with Jean-Hervé Péron, Zappi and Geraldine Swayne of faUSt, Chris Cutler, Geoff Leigh) and THE WATTS (with Tim Hodgikinson, Chris Cutler).

Yumi is senior lecturer in music at University of East London, and a past member of board of directors of JASMIM (The Japanese Association for the Study of Musical Improvisation). (2013-2016)

” I LOVE the urgent energy of this interpretation. the feeling is so alive !” (Robert Wyatt – September 2020)